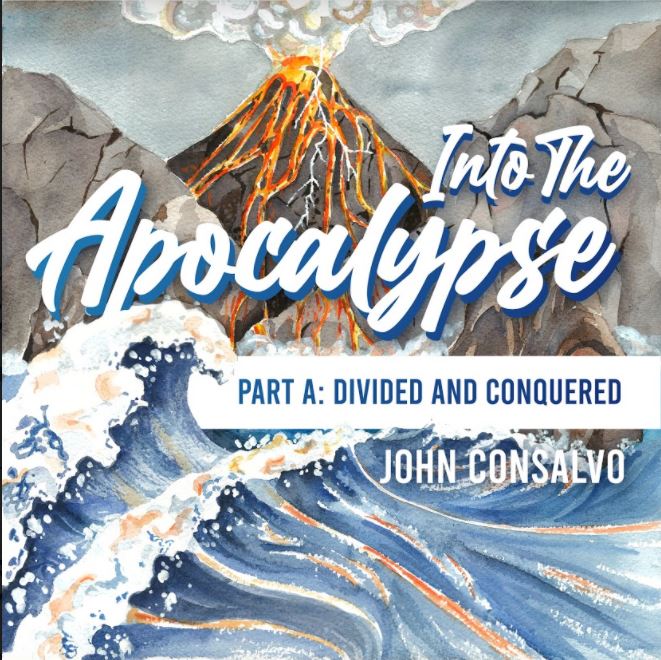 We ended our last week’s review of John Consalvo’s “Troubles of The World” with the words “Come on John, give us an album to listen to…” and as you have probably already guessed, one of our favorite singer-songwriters in the Drooble community actually delivered.

“Into the Apocalypse, Pt. A: Divided & Conquered” is a conceptual album telling an apocalyptic story about the world we live in, which to be honest feels like a pretty realistic depiction of what we’ve been through these past years and decades. Consalvo’s imagination has soaked all these life experiences, media stories, social media obsessions, and post-pandemic realities and has turned them into an impressive and immersive full-length album. In his lyrics, which have always been a signature part of his music, he offers his own interpretation of the world, shares his personal beliefs, and hints on possible ways out of this mess we call our life.

Self-described as a ‘blend of big guitars, pounding drums, thoughtful lyrics, and powerful vocals, the album is a coherent mixture of alternative rock, dark country, and folk. All of these are sprinkled with a ton of indie, grunge, and even a touch of hip-hop (just check out “Before the Beast” to see if you’ll agree). What really impressed us about “Into the Apocalypse…”, besides its astounding production qualities (produced by Tyler Mays from Irongrove Studios), is that despite the grim narrative it doesn’t feel dark just for the sake of it. On the contrary, it’s quite a multilayered musical experience, which often allows some light to shine through the music (tracks like “Lucaidees”, “Humbling Myself”). This is not an album created to bury us in desperation but work meant to help us find the strength and determination we need to strive and progress.

During the first few listens, our favorite singles “Troubles of The World” and “Open The Sea” felt like anchors in this story, because we knew them so well already. However, it doesn’t take too many listens to learn the album from start to end, its lyrics included, so you can experience it the way a rock album should be experienced – by singing along. Once you know your way within the tracklist you start looking for the slight and beautiful nuances that truly make John Consalvo’s music shine. We already knew he’s a master of rock bangers, but we were delighted to hear a version of him that felt more vulnerable (“Somebody Tell Me”) or a version of him that felt even wilder (the almost punk closer “Who Done It?”). Hit that play button, jump into “Into the Apocalypse, Pt. A: Divided & Conquered”. It’s one of the most accomplished and exciting records we’ve heard this year, just as we expected it to be.