I cannot imagine not being creative – Interview with Juan “Punchy” Gonzalez 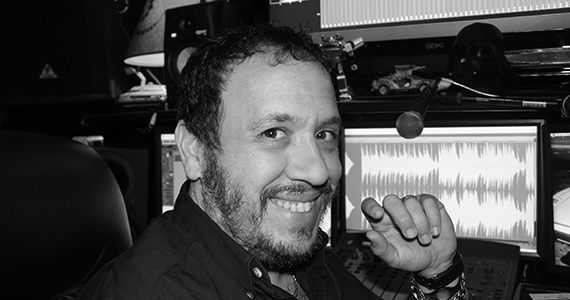 Juan “Punchy” Gonzalez is a record producer and musician who has worked with many famous artists including Morbid Angel, Christian Death, Lover of Sin, Nile. He was also the guitarist/producer of his own band, Diet of Worms. Juan recently started a new music venture called The Synth Lord, which he describes like this: “Imagine a person from 1982 is frozen in ice and wakes up today without knowing the sound fonts have changed and decides to make a record with current technology. This is the essence of The Synth Lord!”

Curious to find out more? Enjoy our interview with Juan, while listening to his music on Spotify. And stay tuned for an Album review of his latest release coming out very soon!

Juan “Punchy” Gonzalez, as many folks call me in the industry, am probably best known for my album production work with artists like Morbid Angel, Diabolic, Christian Death, and Unholy Ghost on top of being the live audio engineer for metal acts like Symphony X, Kamelot, Kings X, Living Colour, Monster Magnet, Mayhem, Yngwie Malmsteen, Morbid Angel, Nile, Overkill, Daath, Twelve Foot Ninja, and even pop acts like Alexa Ray Joel (daughter of Billy) and Melissa Auf Der Maur.  I am also the creative mind behind music groups Diet of Worms, Cosmic Punch, and Lover of Sin.  I have also worked for the national touring company of the Broadway musical, “Chicago,” as an audio technician and have over 20 years of regional musical theater companies under my belt.  Outside of my work as a studio engineer/producer, I also directed and edited music videos for Nile, Christian Death, and Krisiun as well as my own musical projects.  I also created, directed, and edited full-length feature documentaries for Morbid Angel and Nile.  I am a proud endorser of Magix software titles “Vegas Pro” and “Samplitude Pro X,” Positive Grid software (Bias FX), Dean Guitars, and Music Group (Behringer/Midas).  The Synth Lord is my first “true” solo project.  For The Synth Lord project, I played all the music, sang all the vocals, produced, engineered, and even created all the visuals (album art/music video/concept).

My life in music began as a child actor in various theatrical productions starting at the age of 3 in my family’s company, The Spanish Lyric Theatre in Tampa, FL.  By the time I was twelve years of age, I was deeply involved in the production aspect to the point where I became the company stage manager calling shows in IATSE union theaters.  I picked up my first guitar at 17 years of age when I saw that they were the ones getting the girls and not the trumpet players, and I have been involved in rock music ever since.

Introduce your current musical projects and tell us what makes it special for you!

The Synth Lord is my way of paying tribute to all the great music that I grew up with.  All of my life, I wanted to be able to make this kind of music, and thanks to the technology of today, I am able to utilize the sound fonts and vibes that enriched my life.  Music has always been about expression to me and what better way to express my love for a genre than to be part of it, no matter how “dated” it may sound to modern ears.  It is special since to me as the creator in that my dream of making these sounds is an experience that I have waited to do my entire life but were only limited to cost of production and time.  To the listener, I hope they find the good feelings the music brings special and it finds a place in their playlist as a “go-to” when they want to do some aerobics (obvious joke here) or just feel like they are in the 80s again.

My other current project, Cosmic Punch, initially started as a co-writing venture but is now a solo project.  This band celebrates retro music of the 60s and 70s with a modern flair.  Unafraid to be as “nerdy” as it can be, Cosmic Punch tackles the often-controversial issues of science fiction fandom and nerd love.  I have released two records with that project and I am currently working on a third.  It is special to me since I also have a passion for British rock of yesteryear as well as a passion for all things nerdy.  I hope the listener finds the feel-good sounds of this project to be a break from all the negativity, mundanity, and artificialness that surrounds and infects much of modern music.

How do you find the drive and inspiration to keep playing music?

Music is a much better way to waste time and money than playing modern video games.  Some people are into working on cars, doing woodwork, following sports, and other things in their spare time.  I find that my spare time (when I am not working or being a dad) is far better suited to being creative!  I cannot imagine not being creative, even if nobody likes what I am doing.  When I die, I want hundreds of songs with my name published as an epitaph of a person that wishes to express himself through music and video “art.”  (Art is a subjective term that is defined by the consumer).

How is your local music scene from your perspective? Do you feel like you belong there?

Florida is a bastion of cover bands thanks to the fact that we are a peninsula and there is plenty of beach for tourists to go do tequila shots while listening to someone play “Margaritaville” on an acoustic guitar with a PA that consists of two speakers on sticks.  The local original scene here in Florida does not have much room for The Synth Lord as retro music is rather “niche.”  I have started torturing people at local open jams with this music.  As they wait to hear someone badly do “Freebird” or “Knocking on Heaven’s Door,” I am giving them 80s dance music complete with a synchronized light show, video show, and lots of smoke.  The looks on their faces are rather priceless and I get a kick out of it, in an Andy Kaufman kind of way.

Anything by Queen (with maybe the exception of Hot Space) would be listed as a “favorite record.”  My musical tastes swing with my mood.  If I want metal, I listen to it.  The same would go for just about any genre except of Hip Hop.  There has not been a good Hip Hop group since Run D.M.C. and the masterful work of Jam Master Jay, “the real beat master who only got better ‘cause he knew he hasta.”

I own a ProTools HD5 system, but it is NOT my favorite software to make music with.  Avid’s flagship is a glorified tape machine with lots of bugs and thistles.  I use it in my professional work because clients see the word “PRO” in the title and immediately think that they HAVE to use it.

My favorite songwriting tool is Cubase.  When it comes to mixing and mastering, Samplitude would be right there as the first gun that I draw.  Cubase, with its VST technology and vast library, as a songwriting tool, is PERFECT for any musician that needs ideas recorded. Samplitude can manipulate audio like nothing on the planet.  The combination of the two is like having wrenches and screwdrivers in your toolbox.  They each have a role to play.

When it comes to video, I use a combination of Vegas Pro for editing, Hit Film for post and motion tracking for chroma, and Cinema 4D for CGI work.

If I have not sung out a melody line into my phone recorder for later use that I write around, then it usually starts with a basic drum beat loop, my guitar, or my synth.  From there, I add ingredients to the recipe and bake it until it rises.  Vocals are a big thing for me, so if the song is not making musical vocal sense, then I will scrap it or salvage the best parts and move it to a new idea.

Out of all the live shows you have played, which one was the most memorable, and why?

My early 2000s industrial band, Diet of Worms, had some truly epic shows all over the world.  One of the best from that era was in Mexico City when we opened a music festival in front of 10,000 people and the crowd was so loud that we could barely hear ourselves on stage.  The other and more depressing/memorable show was our last one in Haarlem (The Netherlands).  None of us in the band knew it was our last show and none of us enjoyed playing it since it meant the tour was over.

At this point in my musical life, I just want people to listen and enjoy.  I understand that making money in the current industry is difficult (if not impossible) and I already have a career as an engineer.  Obviously, I would not turn down opportunities to make money or play my music live for appreciative audiences, but I am also a realist when it comes to the state of music today.  It is a good thing that there are so many avenues for independent artists to be able to get the music out there, no matter how convoluted the ocean of artists is.

I am new to Drooble, so I am seeing where this goes.  An example of how this company differs from others is having a forum by which the audience can get to know the person (or people) making the music they hear.  I look forward to more work here with the Drooble family and I also look forward to hearing other artists in whatever genre is floating my musical boat that day.