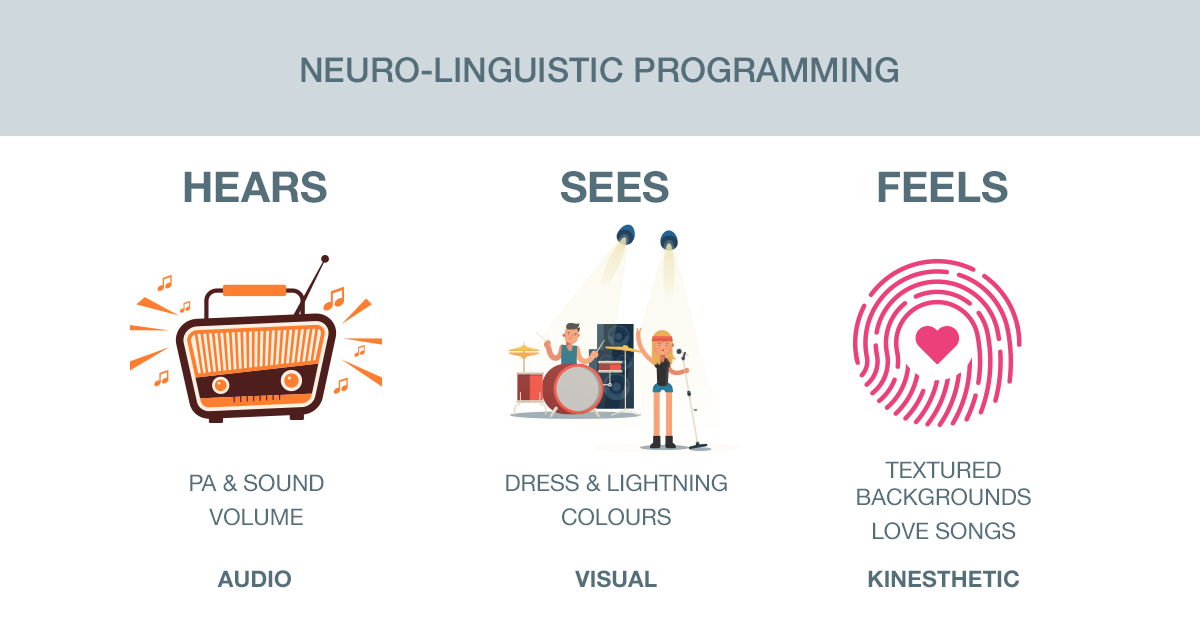 Have you ever wondered why some bands are more successful than others, even when they don’t necessarily play as well as their competition?

You might be surprised to know that those successful bands may not even know themselves but there is a secret formula for reaching 100% of your fans.

It’s called NLP, and it’s not the brand name of a new pedal, sound system or recording label.

NLP stands for “Neuro-Linguistic-Programming” and it’s simpler than you think!
It has been used in the business world for many years to create successful meetings and gain the confidence of others.

Here is a very simple explanation of what NLP is and how it is used.

The whole world is made up of just three languages, and they’re not English, Spanish or Chinese!
The word “language” refers to how there are three basic human ways in which all humans communicate.
These three languages are “Audio”, “Visual” and “Kinesthetic” (meaning tactile), also spelt Kinaesthetic.
I’ve used the word “Tactile” from here on as it’s easier to relate to, rather than using the word Kinesthetic.

Below is a simple example of how these three languages occur in day to day life.

Now these examples are not the whole story but they do express the concept, so to recap and add a bit more information, here are some further notes about the people who have these skills as their primary preference.
(It’s understood that everybody actually has all three skills but that one of them will take precedence in specific situations, and/or as a main prevalent language.)

– AUDIO: Things have to sound good. Audio people are usually good talkers and can be good listeners too. The downside can be that they are often difficult to connect with because they don’t go by their feelings and/or can’t visualise others ideas.
To capture their attention they require words such as: “Listen, hear, speak, talk.”

– VISUAL: Things have to look good. Visual people like to look nice and dress well. Their home also reflects this. The problem when talking to a visual person is that they are quite likely considering how you look rather than listening to what you have to say.
To capture their attention they require words such as: “Look, visualise, see, vision.”

– TACTILE: Things have to feel good. Tactile people are usually sensitive and caring. They enjoy comfort, comfortable clothes and surroundings with textured materials. Unfortunately, this can manifest itself as a poorly dressed person because they just want to feel comfy.
To capture their attention they require words such as: “Touch, feel, sense, catch.”

So as a musician or band, how can you utilise these ideas? Let’s take them in order.

– AUDIO: This is pretty obvious but the very best you can make your band sound, the better. No cutting corners on the final sound equipment. A guitar amp might be average but with an excellent PA it will sound far better in the mix. It will likely be the audio people who will leave if it’s too loud, so balance for everybody is important. (Obviously this doesn’t apply to Death Metal bands!)

– VISUAL: Well you don’t have to spend a fortune on clothes, (sorry ladies), but being reasonably dressed for the gig is vital. This will really depend also on the music genre you play. Also if the venue has poor lighting, taking a portable lighting system with you, (and as an extra wherever you go), will improve how the band looks over all.

– TACTILE: This is the most difficult in the subject we’re exploring in this blog. How do you get the “touchy-feely” people to join you? Texture is a good way, or even something that imitates it. For example a projected image background of a texture, like silk, velvet, woodgrain, possibly even something that relates to the name of your band. 3D looking images are great! Of course, if you specialise in songs that connect through feelings, you’re already more than halfway there!

Now you know why millions of people follow the big popular bands, they have all three languages catered for!
Huge sound systems, back screens and lighting gantries, and outrageous clothes!

These are just a few ideas to get you thinking about “How can we get bigger audiences?
It stands to reason that if you can appeal to all three groups you’ll have 100% of your audience with you!

BONUS TIP:
How to create a band/performance poster that captures that illusive 100% audience!

You are about to put together a poster for your band, or perhaps hire a designer to do so and are spending good money on this, obviously you want the best result possible!

Now it’s obvious that a “colourful” poster is essential, or at least a powerful image in black and white, to attract the visual people. However, catering to the other two groups may prove to be a bit tricky?

For the audio group, you simply add audio words: “Have you Heard?”, or “We have something to Shout about!”, “Listen to this!”, or “Tell your friends!”. Use any appropriate word that connects audio people to your poster. You can even use the word “Read”, even though it appears to be a visual suggestion an audio person may connect to it. Reading involves the process of audibility in the mind. You hear the words as if spoken. (Simply adding “quotes” marks will really emphasise any words you use!)

For the Tactile group, adding touchy-feely words in your text like: “Feel the Pulse!”, “Catch us this week at . . . ” or “Smooth sounds!” Adding an obviously textured background or something that appears 3D and touchable is a great way to involve tactile people too! 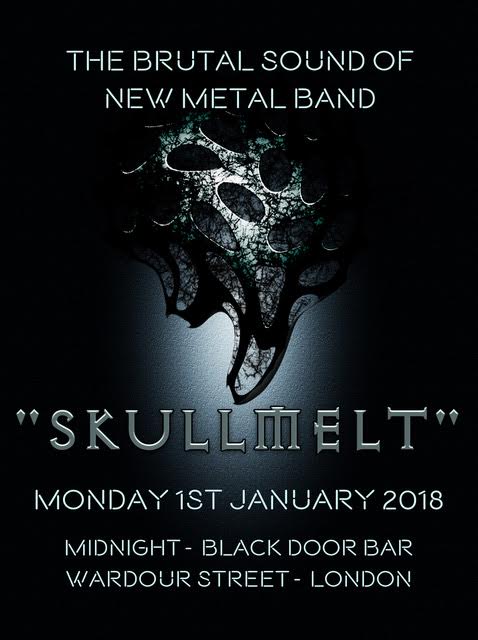 Here is an example poster with these concepts included:

This article is brought to you by Graham George – an experienced and qualified business creative and graphic designer with more than 30 years experience in publicity and communications. He has spent many years sharing NLP with both the public and commercial world.

Graham has also been playing guitar for 60 years from hobby to professional and is a passionate Drooble supporter. Feel free to message him on Drooble in case you need more advice or assistance.