The labyrinths of music – Interview with Leandro Polack 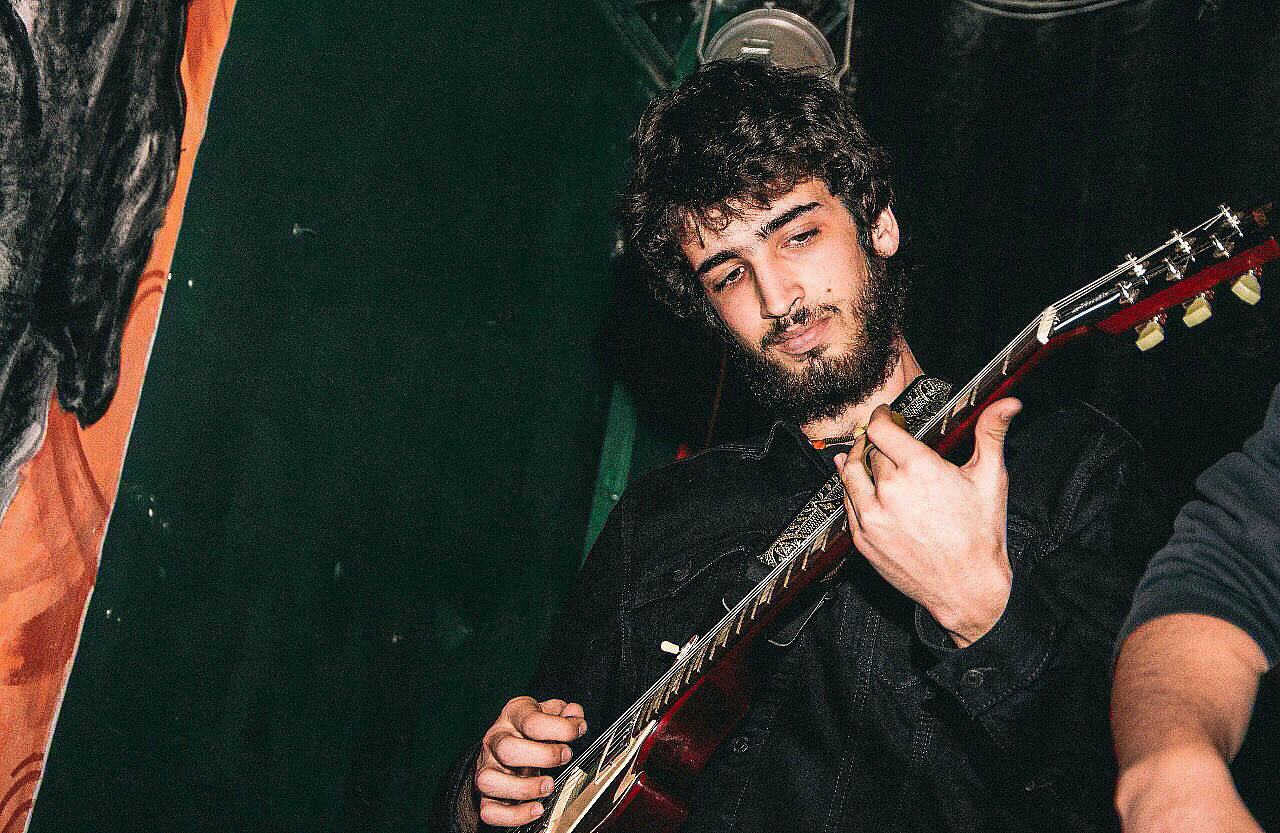 Argentinian guitarist and song-writer Leandro Polack started his long-going connection with music way before he could even write or read. Decades later, he’s a skillful guitar player with the ambition to become better and better. Juggling between playing in a band and writing and producing his solo works we took the time to chat with him about this inspirations, writing process and goals in music. Here’s what he shared with us.

My mom tells this little story as the origin of my understanding and love for music. I was 1 or maybe 2 years old, I’m not really sure. I was playing with this old Fisher-Price keyboard which had an octave of extension and had 8 different kids songs. My mom was washing the dishes while I played with my toy and sang non-sensical stuff (obviously I had no notion of rhythm or key at the time). Suddenly I stopped singing and my mom noticed the lack of sound. She turned around to find me staring at the toy in a sort of daze, my eyes wide open. Suddenly I started singing again, I started to sing the songs in the keyboard. I had understood and incorporated rhythm, key and melody. I proceeded to sing all the songs on the keyboard. As far as I know, my understanding of music I owe to Fisher-Price.

During my childhood I occasionally played instruments but I took up the guitar when I was 9 years old because of a little class offered by my elementary school. Then at 14 I took up the piano but when I turned 16 and bought my first electric guitar, I instantly became hooked and at 18 when I formed my first serious band (I had one when I was 10 with to friends), I decided to become a virtuoso and as the years passed, I became more disciplined, focused, driven and got more in touch with my musical self. At the time I’ve been playing guitar for almost 15 years now and becoming a virtuoso and taking it seriously has been one of my greatest life decisions. It all came natural ever since (with the occasional road bumps).

Currently I have a rock band named Tamal. We’ve been playing for almost 5 years now. A couple years back we released an EP and played a couple of gigs this year but this year our band came to a stalemate and we haven’t played or even rehearsed in a while. It always has been special for me, it has a special place in my heart. It was my first serious band ever and it’s where I learned to play in a group and with friends. My first gigs were also with them and I have great memories and some of my closest friends came out of this band.

I myself have a solo project under the name of Les Pol. Les Pol became my pseudonym because I didn’t want to be on Instagram of Facebook with my real name and the word guitar. So, I used mundo first 3 letters from my surname and added an S to the first 2 from my ,name and formed the pseudonym. In Argentina I make a joke as being the second hand, false brand Les Paul. This project is my most intimate project. In this project I was able to express everything I had in it’s purest form. I also had the pleasure of playing with other people and making a music video (which can be found on YouTube) for my single called “No Puedo Parar de Pensar” which is on Spotify. It’s one of my most personal songs ever and I had a great time playing it with my best friend.

My sources of inspiration are always varying. I’ve always loved music and I’m often inspired by itself. Some days I have no motivation for anything, but music is always around. Another source of inspiration and drive are gigs. When I play live shows I’m overflowed with energy. It invades me and pushes me forward, giving me all I need to keep going. Also the drive to become the best musician I can be pushes me to keep on overcoming my obstacles.

My local music scene is very strange. Even though I love it with all people in it (they are kind and welcoming); sometimes I feel it’s a bit disorganized and this doesn’t really help those involved in it. I do feel that I fit in, but sometimes, there is a sense of lack of organization or lack of drive which alienates me and makes me become somewhat distant. Still, I always find people who are ready to join in for a ride with all the energy it takes and put it all the effort needed.

My favorite record of all time has to be “The Dark Side of the Moon” by Pink Floyd. That album changed my entire perspective on music. Many songs from there changed my way of producing music, producing albums, producing songs, etc. It made me see music in a way I never considered: the concept album. Beforehand, I only saw album as a collection of songs which could work individually (which is a totally valid way of producing albums). After that, I began to see albums as a way of making songs connect and tell a story. Albums became a whole, an experience, and songs were powerful individually and even more powerful in the whole. It was enlightening. Also I cry a lot with “Us and Them”, “Great Gig in the Sky” and I love “Time”, so, it really plays out extraordinary.

Honestly, I don’t have much experience using tools for music production. In terms of hardware, I’m not that familiar with any particular music production tools. Software-wise, I use Amplitude for guitar effects on the computer, Cubase and some synth software that came bundled with my IRig.

My songwriting process is strange. It works as a puzzle. I might feel trapped somewhere, in a labyrinth, which I need to escape. But to escape, I must be able to see it as if I’m watching the labyrinth from above. When I can see it all as a connected, coherent whole, I can walk through it, the way becomes natural. I usually start with the music, which is my go to area. Afterwards, I search for the words, I unravel the mysteries of the labyrinth. What I feel are the paths and my way out of it is having the best and most beautiful way of expression. After I can make some sense put of it, the words sometimes come natural, sometimes I have to make them come out. After the work is done, I feel I have escaped the and understood the labyrinth, the story is over, and I wait for the next one to take me in.

The most memorable show I played was one with my band a couple of months ago. We playeda festival in some warehouse and it was a blast. People danced to our music, sang some of our songs (the people who knew them) and were overall thrilled to see us live. It was very fun because we were able to interact with the people and the people interacted with us, partying with our music as we played the songs we love.

Drooble has helped me connect with people and get my music distributed to a wider audience. I love it because of that and I think it’s a really important tool. In a world where musicians are often disconnected from each other and music distribution and administration is tough and very expensive, it is important for people to have a go to place where they can find some support on these areas, and I believe that you guys are doing a fantastic job in that department.