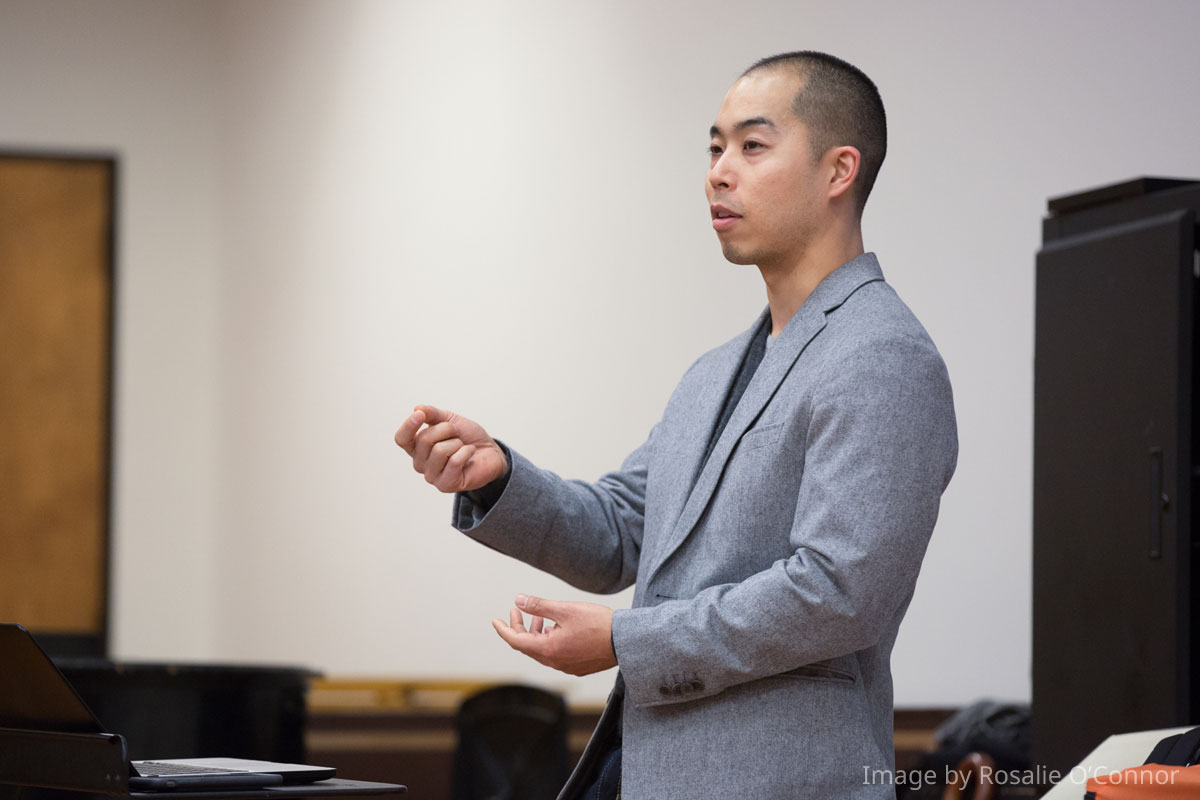 Hey, guys. Today we are happy and thankful for another opportunity to introduce you to someone inspiring, who might just change the way you play and think about music for the better. Noa Kageyama has been playing the violin since he was 2 years old and has since helped numerous musicians become the best performers they could be. After a childhood and adolescence revolving around music, Noa was introduced to psychology, particularly sports psychology, and its applications to musical training. He decided to put his violin down and committed himself to helping people who seek to become better at what they do (music and other performing crafts), learn how to perform better under pressure and develop their full potential.

Noa Kageyama is currently on the faculty of The Juilliard School in NYC and the New World Symphony in Miami where he helps talented musicians prepare for orchestra job auditions. He also conducts workshops and webinars on performance enhancement and overcoming performance anxiety. He has worked with the New England Conservatory, Peabody, Indiana University, Northwestern University and the U.S. Armed Forces School of Music among others. He’s been a speaker at seminars such as the Starling-Delay Symposium and National Orchestral Institute, for organizations such as the Music Teachers’ National Association and the National Association of Teachers of Singing, at summer programs like The Perlman Music Program, and in online/media programs.

He started the blog The Bulletproof Musician to share his thoughts and the experience he acquired over the years from both his musical background and psychology training. It’s been a huge success and has helped tons of people since. We strongly advise you to check Noa’s blog out and we guarantee you’ll become at least a little bit more confident, dynamic, and inspiring as a performer.

Hey, Noa, we’re so happy to have you with us today. You’ve spent years implementing psychological approaches normally used for training athletes into performance enhancement for music and art professionals.

I’m sure there must be some aspects of sports psychology that are not so applicable to music practice and performance, but I’ve found that there really is quite a lot of overlap between athletes and musicians. Someone once said that “performance is performance is performance” and both athletes and musicians must learn to get into the right mental, physical, and emotional state, in order to perform up to their abilities when it really counts. No matter how different the skill they are about to perform may seem – whether it’s diving off a 10m platform, shooting a basketball, or playing the clarinet, the principles of performing optimally under pressure tend to be pretty much the same across performance domains.

Your training for a professional violinist career started at age 2. Do you have any memories and what do you think the earliest age a child should start training would be?

I do have memories of practicing, performing, and playing at quite an early age. I have memories of a group class, driving to lessons, listening to a recording of a piece as I took a pre-concert nap, and eating at Burger King after a lesson (and being disappointed at the toy that came with the meal) which were all probably from when I was 3 or 4 years old.

It’s difficult to identify a “best” age at which to begin playing an instrument. I think much of it depends on the child, and how interested or receptive they are. I worry sometimes that music lessons and training at the early ages can start to become a race – sort of like seeing how quickly one can get their child to read or learn their multiplication tables – and lead not just to a lot of unnecessary pressure, but also make it difficult for young musicians to realize and appreciate that there really is no final destination in music. Like climbing an endless mountain range, getting to the top of one mountain only serves to help you see that there’s another even higher mountain to climb on the horizon.

What’s the shortest, one-sentence advice you can give to musicians for live performances?

I think the key to not only performing more effectively but actually enjoying oneself more, is to learn how to switch your mind from practice mode (self-monitoring, judging, critiquing, analyzing) to performance mode (creating, staying in the moment, blending, matching, etc.) when it’s time to perform.

How does one find the balance to learn from their mistakes but not dwell on them too much? Where is the thin line between the two?

We do have a tendency to dwell on mistakes and failures – and to do so rather unproductively. The idea is to look at exactly what happened, and see if we can figure out how or why it happened, and what we can do differently to either a) prevent it from happening next time, or b) react better to it in the moment.

Once we’ve completed this “post-mortem” if you will, and extracted every bit of learning we can from the situation so that we will be better prepared next time, the event no longer has any value to us and our future performances. This is the point at which we must simply move on and let it go, because there’s nothing more to be gained from dwelling on it. Easier said than done, of course, but it does help to have done this post-mortem. If we don’t, the tendency will be to keep ruminating on the event without actually learning anything from it.

You often mention energy regulation – what is it and how does it apply to musicians?

We all have an optimal “zone” in which we tend to have our best performances. For some, their optimal zone of functioning is at a pretty low level of activation or energy. Others do best at a moderate level, and there is a surprising number who perform best at a high level of energy. They may not be comfortable there, but they have their best performances there nonetheless.

The key lies in identifying your optimal zone, and learning how to regulate your energy so that you can get into the right zone that works for you. This could involve various sorts of relaxation exercises, but at times could even mean learning how to get your energy up, for times when you might be feeling too lethargic before a performance.

Does coaching work online? Can people really be motivated and disciplined through a computer screen?

I’ve found that coaching does seem to work pretty well online. It would be different if we were doing therapy, but performance coaching is much more like regular weekly lessons. And most of the people whom I meet are already motivated and disciplined, so much of what we do really just centers around identifying the skill areas that need the most work and coming up with ways to develop and test out those skills in live performance situations.

In that sense, how do you feel about online music collaboration? Do you think what Drooble is trying to achieve is possible?

I’ve been pretty geeked out about the internet ever since I learned about it back in college. Freshman year, my dorm was the first on campus to get ethernet access, so my friends and I did a lot of experimenting with voice call apps, online gaming (think Doom 1.0), and even tried to watch the NFL draft streaming live (which totally did not work). So yes, I think there’s a lot that the internet can do to connect us and facilitate collaboration – but we have to be careful not to simply consume content passively, but build on what we find, and connect with each other to push things forward. I’m reminded of a TED talk which describes how dancers from around the world are taking inspiration from each other to accelerate the evolution of dance styles.

What would you say is the most important thing you’ve learned from practice and not from your training? Did anything surprise you along the way?

I spent most of my life playing music, but not much of it actually practicing in a systematic, deliberate way. It really wasn’t until grad school that I realized what effective, solution-focused practice actually looked like. And that doesn’t even begin to address what it was like for me to realize that there were concrete mental skills that made it possible to perform more consistently at a higher level too. Whether it’s by reading books like Make it Stick: The Science of Successful Learning, by Brown, Roediger, and McDaniel, Peak, by Anders Ericsson, or Performance Success, by Don Greene, it is well worth learning how to practice effectively and perform effectively even if one doesn’t plan to do a ton of performing, because these are skills that transfer over into everything we do, whether it’s giving a presentation at work or playing a competitive match of tennis on the weekend.